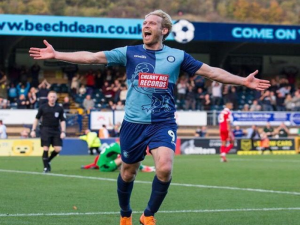 Craig McKail-Smith is an English professional footballer. He was born on February 25, 1984 in the city of Watford. Played 7 matches for Scotland and scored one goal.

Speak at a professional level for Wycombe, Peterborough and Brighton. Now defends the colors of Notts County – one of the oldest professional football clubs.

“Football in England is the most popular kind of sport”

Hello Craig. Thank you for agreeing to an interview. Your professional career was very interesting. You have played at such well-known professional clubs as Peterborough and Brighton. But I want to know more about your childhood. What was it like?

I am very pleased that my person is interested in a country like Ukraine. From my childhood, I dreamed of becoming a professional footballer. My father and grandfather played football at the same time, and helped me in this game. Up to age 14, I played at the city level, and then joined the team of St Albans, who gave me a lot. I made my debut for this club at the age of 16. At the level of semi-professionals, I realized that such a powerful English football. The coach saw me a great potential, and often helped in practice.

Rumor has it that football fans in Watford are the most passionate fans in England?

First of all I would like to say that the English people love soccer. In Watford there are very passionate fans, but they cannot be called the hottest. I believe fans of West Ham, Millwall and Portsmouth are the ones who are ready to kill for their club’s victory. Football in England is the most popular sport.

In your hometown there is a club that pops up in the Watford Submarine. Why did not you make the first steps in this team?

Yes, indeed, Watford is a very interesting club with its history and traditions. I tried to get a job in Watford, I trained myself with the youth team, but they did not want to sign me. For them, I was not enough technical performer. That’s why I joined St Albans and I’m not sorry about it.

“I really wanted to play at a high level, but in the end my dream was fulfilled”

After lucky years at the semi-professional level, you moved to Peterborough, which set you 200 thousand euros for you. Was this the only club that made you an offer?

By that time, Peterborough was the only club that set me such a sum. Then the club massively signed the young talents, and prepared them for the Premier League clubs. I really wanted to play at a high level, and at that moment my dream was fulfilled. I immediately played in the first team and spent happy 4 years there.

You have traveled to Brighton as a legend: 185 Peterborough and 80 goals. Is it possible to call that time peak for you?

The moments of happiness people never forget. I often recall those times, it was great. I got some important trophies that were important both for me and for the club, were scrambling to the goals, and scored in every second match. I spent my days talking to wonderful people and I really think this time – the peak for me.

Brighton has given you a big sum of 3 million euros. Speaking for this club, you could go to the highest league of England, but later stop playing. What happened?

The period of speeches for Brighton I, of course, wrote to myself in the asset. At first everything was great: a bargaining contract, an ambitions from the head coach and a place in the main team. But, as it often happens in football, I got a heavy trauma that stopped my progress. He always knew and believed that Brighton would enter the High League, because the team had a plan and an incentive. Maybe now, I could help the club in the fight for a submarine medal, but I think that I completely gave myself up for the sake of the team.

“Support for fans is amazing, it helps”

Do you have some funny episodes about which you can tell me?

Once, when I was still playing in St Alban, our coach, during the break, hit me with a tactical board on the head. It was painful, but funny. In Peterborough, my partners were very fond of watching one on top of one another. After the game, I grabbed and took me to the middle of the field, taking off shorts from me. It’s unrealistic to forget.

As of now you are playing in the fourth division of England. What is the average attendance of stadiums in this division?

As of now, I am in favor of Notts County, which is in the last place in the division. But, in spite of nothing, we are always supported by about 10 thousand fans. This is a lot for League 2. The support of the fans is amazing, it helps.

In Wycombe you had to play with heavyweight footballer Adebayo Akinfenva. He is very tough on the football field, and what is his life?

Adebayo is a wonderful person. He is a leader both on and off the field. This person is inspired to do good deeds and to go forward only. Akinfenva is also a beautiful father with two beautiful daughters. I am trying to maintain contact with him to this day. 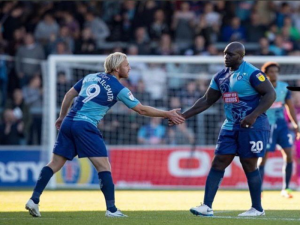 For the Scottish team, you played 7 matches, including Spaniards and Brazilians. What match do you remember most often?

My debut for the team was exactly with Spain. It was an outstanding event for me. Unfortunately, then we gave up and could not go further on the Euro, but the experience that I received, the help gave me the next years of my career.

What do you know about Ukrainian football?

Frankly speaking, I do not know much about Ukrainian football. Several times played the Dynamo Kyiv Dynamo at the Europa League and the Champions League. This is a very young team with a promising trainer and great ambitions. Also, of course, I know Andrew Shevchenko, the owner of the Golden Ball of 2004. I have always been a fan of his style of play, but in England football is much tougher than in Italy.